Anzo: when modernity was revolutionary

In the context of Franco’s dictatorship and cultural effervescence that his native Valencia was experiencing at that time, Anzó founded, together with Andreu Alfaro, Rafael Solbes and Manolo Valdés the group”Estampa Popular de Valencia” . As a result of his activity within the group, Anzo will stand out in the development of an aesthetic based on American Pop Art and will become the forerunner of this current within Valencian artistic culture. However, the richness of his work escapes the limits imposed by any label in which the true plastic dimension of this artist is intended to be circumscribed, whose creative genius is born from the incessant search for new answers. Without a doubt, his artistic legacy deserves to recover the space he occupied in life as one of the most original and visionary creators of postwar Spain. 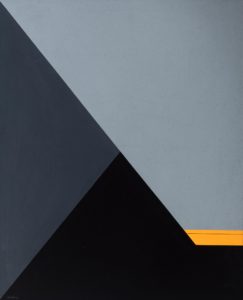 From Setdart we want to contribute to the dissemination and revaluation of his work by presenting on the 26th the first monographic auction dedicated entirely to the production of the Valencian artist. The set of unpublished pieces, from the artist’s private collection, allows us to trace a journey through the plastic evolution of what he has been, with his ability to assume and interpret the social reality of his time, one of the architects who paved the way towards the modernization of contemporary Spanish art.

Anzo never put limits on his creativity. From his youth he showed signs of an irrepressible innovative spirit that led him to experiment and investigate the new theses that promulgated the most groundbreaking international trends. In this way, his work progresses and is enriched intermittently between different languages such as neo-figurativeism, pop art, informalism or lyrical geometry, molding them at will until he engraves in each of them his characteristic personal imprint.

In the multiple styles that he cultivated, restlessness and uncertainty about the future of the human being in a new world dominated by the vertiginous transformations derived from technological advances flies over in a perennial way. From his youthful works, the alienation of man devoured under a cloak of apparent progress will be the backbone that will run through his entire production.

During the 70s, he addressed the issue of loneliness and isolation in a technified and overcrowded world through the emergence of geometric, circular, spiral or labyrinth motifs that, like mechano pieces or puzzles, become a metaphor of the reduction of the human being to a mere die of a great machinery.

In subsequent decades, his plastic evolution led to a pure geometry that progressively acquired an obvious lyrical connotation. Behind the apparent coldness of the geometric lines, a poetic sensibility is glimpsed in which from the superposition of planes and colors forms rhythmic sequences that, at times, become almost musical.

In his latest works, he takes up a language of informalist roots where the alteration of textures, geometric schematism, and the study of volumetric contrasts translate the loneliness and loss of identity that hides under the supremacy of the whole over the only thing. 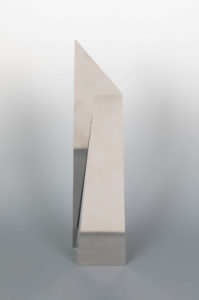 As for his sculptural production, Anzo will experiment with all kinds of materials under which, whether in wood, steel or stone, he reflects on the benefits and drawbacks posed by a world governed by increasing industrial standardization and serialization. In them, the very dilemma that Anzo faced, torn between the hope of progress promised by the technological revolution and the nostalgia for a world more connected to our roots and origin, is revealed. 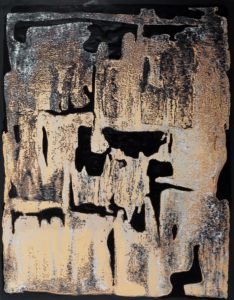 However, Anzo’s artistic corpus shows us even from the harshest social chronicle the inherent beauty contained in each and every one of his series in which the plastic values of an esthete prevail who fundamentally pursues beauty through harmony , color and line.

Anzo is above all heir to a culture and education forged in a conflictive and uncertain historical context from which the plastic language with which he gave birth to his personal worldview of a dystopian and contradictory world germinates. Years later, his work is reborn with a discourse that remains as valid as before.