His palatial appearance is obvious ; Five meter ceilings, room after room and each with its use, gardens, gazebos, stained glass windows, a modest Parisian opulence in the heart of Barcelona. That appearance hides something more important, a home. This is how we must consider it, as the home of the same family for over a hundred years. Generation after generation all its inhabitants have maintained, lived and preserved what was their legacy, a historic building and the collection that it housed.

Like all stories, they all have a beginning and this house would be no less. The family’s bourgeois past is a faithful reflection of an era and society that made Barcelona one of the main cities of its time. The origin of economic prosperity dates back to the 19th century when the family saga expanded a textile industry whose headquarters would be in the very Rambla of Catalonia. Let’s not forget the beautiful time when everything takes place, opera nights at the Lyceum, gardens and mansions in the Ensanche, Gaudí and Modernism, one of the moments that left the greatest mark on the city and that today are part of its hallmark. of identity

The strength allowed them to build a magnificent residence following the French taste and unlike the old aristocrats who had to maintain their old heritage, the bourgeoisie created from their own collector eagerness a treasure that has continued to hang decade after decade from the same walls. We can see in old photographs an echo of the splendor of parties, sunsets, weddings and all kinds of evenings in their rooms and the works of art that were there as silent witnesses of such wonderful days. 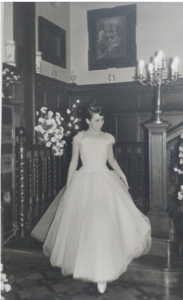 Coming out, circa 1950. In the background you can see some pieces of ceramic and glass, up for auction in Setdart

The collection that we find is an example of the personal sense and taste of the family members. On the one hand, we can observe the sense of protecting and valuing the most local heritage, such as Gothic painting or the canvas with the Virgin of Monserrat to the value of ancient crafts such as Catalan ceramics and glass.

The old masters were a reference when it came to making the new heritage. In the main dining room of the house presides over “the Bath of Betsabe”, an impressive canvas that on the back hides a clue of its seizure during the Civil war and how it should have been saved due to its relevance. Another fundamental work can be found in the library, A Canvas by Antonio del Castillo y Saavedra, worthy of being in a museum. A not exaggerated appreciation if we take into account that a version of this work is in the Museum of Fine Arts of Córdoba.

The legacy of a family for more than a century goes on sale and in the eyes of the public from the hand of Setdart, thus offering a unique opportunity to value both the people who have so carefully guarded the works and the power to contemplate them in the The same palace where they were to reveal even a small part of their life and history.