The legacy of the New World. On January 20th in Setdart.

Baroque art, from the court to America 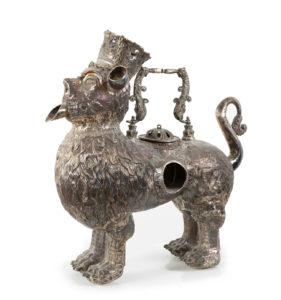 The next auction on the 21st will host a selection of works made in Spain and America between the 17th and 18th centuries. This auction aims to show the relations between the two and make us aware of the important vice-royal legacy in our country.

Court artists would be instrumental in the expansion of art in the new world. The cosmopolitan tastes of the nobles and clergy of the king’s environment were imitated in the new cities by the incipient class, each day more wealthy. The artistic production that we find in Mexico or Peru, for example, would not only reflect the tastes of the court, but all the influences of the native culture and also the oriental world, whether it was Hindu, Chinese or Japanese. Cultures that reached the Pacific coasts in America and that crossed the entire continent leaving their mark before embarking again for Europe. 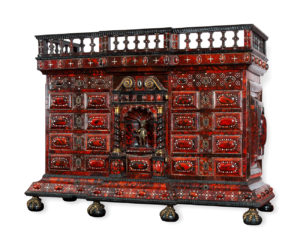 A perfect example of the union of all these cultures would be lot 35052736, an exceptional cabinet from New Spain . On the one hand, we see clear reminiscences of the type of furniture that the aristocrats close to King Charles II would have had in their homes, having been imported from Italy or Flanders. These cabinets, with rich applications of tortoiseshell and gilt bronze elements, would also be produced in the Mexican environment, where the geometric shapes would be made even more spectacular thanks to the incorporation of engraved bone plates or mother-of-pearl elements. The inlay of this type of material was so successful in Mexico that it came to be considered as capable own art. Conchados, one of the most original and typical samples of New Spain, are the product of those cabinets and namban chests that arrived on its shores from Japan since the 16th century.

Art as an evangelizing tool was fundamental in the New World, where missionaries had the task of instilling Catholicism in all the inhabitants of the continent. . The carvings or paintings were first the didactic instrument and later the object of popular fervor of the new society. The cross of Josefa Sánchez (lot 35011444), an almost unknown Spanish painter, presents several iconographic types that will later appear on the other side of the ocean. For example, “Purísima” at the bottom will have a deep impact on Marian representations such as the Peruvian Virgin from lot 35055694. It is very interesting to mention how the Virgin of Guadalupe’s own invocation arose during this period and was able to combine both the love for the newly known Mary by the American population and be a reflection of that same society. . To highlight the Guadalupana of extraordinary quality at auction (lot 35147299). The unique character, forged from so many influences, and its great visual appeal made all viceregal art an object of desire and admiration in European eyes.

Auction of antique frames on January 7th in Setdart.

Mestizo art and devotion in America