The Venetian Settecento in Setdart by Giovanni Battista Piazzetta.

Giovanni Battista Piazzetta was one of the most influential artists of the Venetian settecento. The rococo theatricality of his style developed especially in religious themes, devoting instead to genre painting and portraiture a more intimate and personal treatment.

The latter is evident in two canvases that can be purchased at Setdart Auctions, in which the portrait genre reaches a high quality. In both cases, the painter prioritizes the expression of the person being portrayed, whose face occupies a large part of the painting and whose features appear naturally carved through a daring light modulation.

In one of the oil paintings, a gentleman headdress with fur hat (see batch 35217161) rests his hand on the hilt of his sword. The studied lighting, of dark influence, is the main expressive resource used by the painter. It is a focused, directed and artificial light that enters through the lower part of the painting and gives candor to the carnations, while emphasizing the haughty and somewhat mysterious attitude of the character, leaving the background in gloom.

The impeccable use of light to highlight the volume of the figures and the psychological depth in capturing expressions also characterizes the other portrait (lot 35217160). On this occasion, Piazzetta gives us the image of a gentleman in a concentrated attitude, conscientiously observing a bronze medal that he holds between his fingers.

They are accompanied by a certificate of authenticity issued by the academic and art historian Pietro Zampetti. 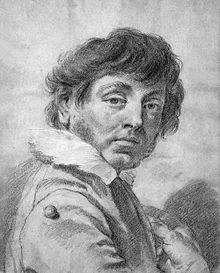 Self-portrait (drawing from the 1730s) kept in the Thyssen-Bornemisza Museum in Madrid.

GIOVANNI BATTISTA PIAZZETTA (Venice, 1682-1754) – Venetian Rococo painter, author of religious themes and genre scenes, Giovanni Battista Piazzetta was the son of the sculptor Giacomo Piazzetta, from whom he learned the art of woodcarving in his early years. In 1697 he began his pictorial training as a disciple of Antonio Molinari, and later he moved to Bologna. He remained there between 1704 and 1705, and expanded his training in the workshop of Giuseppe Maria Crespi, although there are no documents that formal tutelage was given. However, through Crespi Piazzetta was influenced by Carlo Cignani, and the Venetian also learned from Crespi’s painting, in which Caravaggio’s chiaroscuro is transformed into a language of graceful charm that surrounds the protagonists of his paintings, popular characters taken from everyday life. In Bologna Piazzetta was also impressed by Guercino’s paintings. Around 1710 he returned to Venice, where he soon acquired great fame. In his mature years he will develop an art characterized by a warm and rich chromaticism and by a lyricism endowed with a certain mysterious air. He often depicted peasants in his plays, even dressed in rich robes. He was especially original in the intensity of color that he uses in his shadows, as well as in the almost supernatural quality that he gives to his lights, even achieving the impression of three-dimensionality in his paintings. His charcoal drawings are also notable, especially those of groups of heads or figures. He also made some engravings. In 1750 Piazzetta was appointed director of the newly founded Scuola di Nudo, and he devoted the last years of his life to teaching. Previously, in 1727, he had been appointed a member of the Accademia Clementina in Bologna. He is currently represented at the Accademia Gallery in Venice, the Louvre Museum, the National Gallery and the Royal Collection in London, the National Gallery of Art in Washington DC, the J. Paul Getty in Los Angeles, the Art Institute in Chicago , the Metropolitan Museum in New York, the Pinacoteca Civica di Vicenza, the Albertina in Vienna, the Thyssen-Bornemisza in Madrid and many others.


We don't find any widget to show. Please add some widgets by going to Admin > Appearance > Widgets and add widgets in "Right Sidebar for Pages" area.