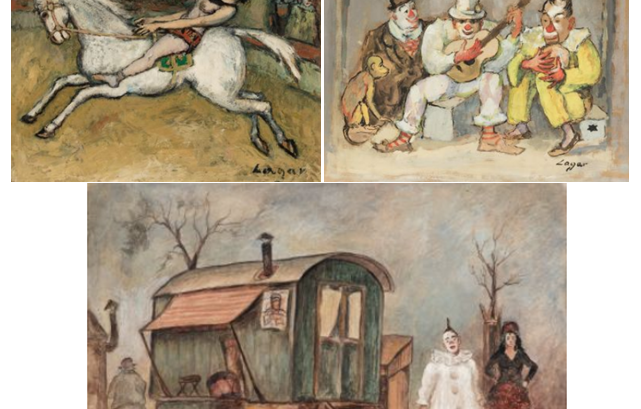 The circus world through contemporary art

The relevance that the circus world acquired between the end of the 19th century and the beginning of the 20th century was reflected in art through an extensive cast of artists who, attracted by the bohemian and eccentric spirit of the circus, they wanted to capture the essence of this wonderful and cathartic visual spectacle. At that time, and especially in Paris, the circus had become one of the great epicenters of social life, becoming, without a doubt, an inexhaustible source of inspiration and experimentation in the development of the artistic avant-garde.

In fin de siècle paris, artists such as Tolousse-Lautrec, Chagall, Picasso or Leger, discovered the possibilities that this great show offered them, opening the doors to a dream world, where fantasy, magic and the desire to recover the lost paradise of their childhood, meant refuge and hope in the face of daily misfortunes. In this way, the circus, which from its irreverence and optimism aroused the most primal and genuine emotions, was discovered as the perfect setting in which to unleash the new spirit of modernity and freedom championed by the artistic avant-gardes. This space free of social conventions was also the space for vibrant colors, fast-paced movement, and compositional freedom found a place to come alive.

However, in contrast to this idealized image of the circus world, there were many artists who they reflected the crudest and most sordid face that was hidden behind him. The circus became a metaphor for the human condition where tragedy and comedy became two sides of the same coin. From then on, the feeling of melancholy and nostalgia was identified with the marginal condition of those fascinating characters, who, after the stage lights went out, lived a reality far removed from the splendor of the show. From this point of view, Picasso’s representations are probably the most clairvoyant example of the tragic meaning that enveloped the circus stars, whose picturesque, marginal and transgressive life was identified with that of the artist himself. In this sense, the figure of the clown embodies the artist’s feeling of incomprehension and loneliness like no other. But beyond Picasso, there were many Spanish artists who, like Benjamin Palencia, Antoni Clavè, Maruja Mayo or CelsoLagar, made the circus theme one of the centers of their production.

In the case of Lagar, the circus imaginary acquires a special relevance that gives light to what will be his most famous and, at the same time, saddest works. In them he gives off the feeling of deep loneliness and uprooting that accompanied him since he left his native Andalusia to settle in the city of Paris. After the initial learning that the discovery of the historical avant-gardes entailed, Lagar sought a path of expression of his own marked fundamentally by a Picassian inspiration, visible on the canvas that we will present at auction on the 29th (35205098).

As can be seen in the work being auctioned, his constant visits to the traveling circuses of Paris became the chronicle of an interwar society. The apparent happiness of the characters that make up the canvas (the clowns, the trapeze artists, the dancers or the circus animals) hides a halo of melancholy and sadness, reflected in their serious and thoughtful faces.

In short, the circus show became, by the hand of great artists, a reflection of the spectacle of life.

Some works sold in Setdart