A young woman sitting on the steps of the door of an old whitewashed house mends some nets with a thoughtful and patient attitude . He occupies the foreground of a perspective that shows us, behind him, other women carrying out the same work, sitting in groups next to their houses. In this magnificent painting by Joaquín Sorolla, in auction on January 21st, we recognize the Basque topography, specifically the fishermen’s houses that made up the Hondarribia fish market.

A limpid sky diffuses a clear light that highlights the vivid colors of the women’s clothing, which in the distance are reduced to chromatic impressions, both they and the clothes hung in the sun before the vaulted walls of the farthest from the mansions. Behind him, you can see the line of the sea. A few boats rest on the sand. The scene conveys the calm atmosphere of the afternoon, when the fishermen have already returned from fishing. Despite showing a studied composition, it does not lose the air of spontaneity that characterized the Sorrollesque work. 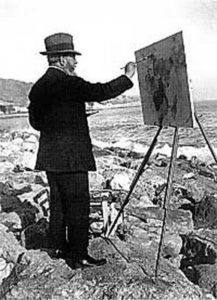 The relationship that Sorolla established with the Basque Country led to an important stage in his career. In addition to the counterpoint in terms of lights and landscapes he represented with respect to his native Valencia, his northern stage provided him with a rich and varied clientele. In San Sebastián, the Valencian painter worked on notes and sketches of the people of the port and its surroundings. Most likely, the work that concerns us corresponds to one of these visits or excursions that the artist would make around the capital of San Sebastian, although it is supposed to have been completed in Madrid.

The luminist master worked on this type of works since 1889, when he and his family spent a short stay in San Sebastián, on his return from the Universal Exhibition in Paris and before spending a season in Valencia with his in-laws. Sorolla, like his contemporaries, began to work on new techniques imported from England and France, such as pastel and watercolor, which allowed the realization of quick notes or sketches in color.

Other works close in time to “Fuenterrabía” (1890), this gouache with a Gipuzkoan theme by Sorolla that Setdart puts up for auction (certified by Blanca and Francisco Pons Sorolla), demonstrate the artist’s interest in fishing themes: “Revising the network “(1898) or” El Calafateo “(1890) were also presented -as well as the work that concerns us- in the Exhibition of Watercolors and Papers held at the Círculo de Bellas Artes in Madrid in 1890.

JOAQUÍN SOROLLA Y BASTIDA (Valencia, 1863 – Cercedilla, Madrid, 1923). Awarded upon finishing his preliminary studies at the Escuela Normal Superior, he entered the prestigious Escuela de Bellas Artes de San Carlos de Valencia, in 1879. Also, during his visits to Madrid, in 1881 and 1882, he copied paintings by Velázquez, Ribera and El Greco in the Prado Museum. Two years later he obtained a great success at the National Exhibition of Fine Arts with a history painting, which prompted him to apply for a scholarship to study at the Spanish Academy of Fine Arts in Rome. Having achieved his goal, in 1885 Sorolla left for Rome, staying before arriving in Paris for several months. In the French capital he was impressed by the paintings of realists and painters who worked in the open air. At the end of his years in Rome, he returned to Valencia in 1889, settling in Madrid the following year. In 1892 Sorolla showed a new concern in his art, becoming interested in social problems when he represented the sad scene of “Another Margarita!”, Awarded with a first class medal at the National, and the following year at the Chicago International. In 1906 he held his first solo exhibition at the George Petit Gallery in Paris, where he also demonstrated his skills as a portraitist. In 1908 the American Archer Milton Huntington, impressed by the artist’s exhibition at the Grafton Gallery in London, sought to acquire two of his works for his Hispanic Society. A year later he himself invited Sorolla to exhibit at his institution, the result being an exhibition in 1909 that was enormously successful. The relationship between Huntington and Sorolla gave rise to the most important commission of the painter’s life: the creation of the immense canvases destined to illustrate, on the walls of the Hispanic Society, the regions of Spain. Trying to capture the essence of the lands and people of his country, Sorolla toured Spain between 1911 and 1919, without ceasing to hold exhibitions. He is currently represented in the Prado Museum and the one that bears his name in Madrid, the Metropolitan in New York, the Orsay in Paris, the J. Paul Getty in Los Angeles, the Fine Arts in Bilbao and Valencia, the National Portrait Gallery of London and many others.

The gypsy people, beyond the stereotype. José Mongrell and Joaquín Sorolla.