Furniture and decorative arts dated between S XV-XIX on December 16.

Setdart presents at auction a careful selection of furniture, dated between the 15th and 19th centuries, which show the important evolution of this genre depending on the period and the artistic taste of each territory.

Among the pieces that will be auctioned, an exceptional German chest from the 17th century stands out. from a Renaissance heritage, it is a type of cabinet that continues the models established in Augsburg, a German city that became one of the main centers of furniture production, particularly famous for its fine and intricate marquetry (see lot 35110693).

Taking into the common thread determined by the exceptional marquetry of the pieces that are tendered at the auction on December 16, we found two important chests of drawers made by Catalan and Mallorcan cabinetmakers who attended the royal workshops of Carlos IV throughout the 18th century (see lots 35110676 and 35111046). Both pieces will delight any collector due to their elaborate fronts and envelopes worked in high-quality marquetry in rosewood, lemongrass and fruit woods. 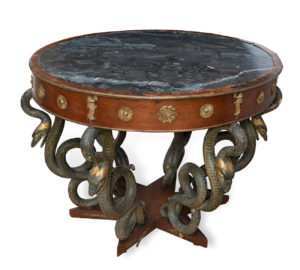 The auction is completed by a Louis XV-style desk attributed to the prestigious cabinetmaker Pierre Migeon IV, one of the leading exponents of Baroque furniture. together with André-Charles Boulle, Charles Cressent, Antoine Gaudreaux and Jean-François Oeben; as well as a Gueridón table in the Empire style and period, with a starry base on which supports a complex network of snakes that act as legs, a characteristic that has its roots in the earliest gueridón, which was often supported by a human figure African, Greek or Egyptian (see lot 35185053).

Here are some details of lots that are part of this careful selection of furniture and decorative arts.

The ‘japanning’ in the Spanish furniture of the 18th century