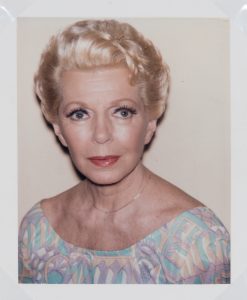 “Lana Turner”, portrayed through WArhol’s Polaroid in 1985. Up for auction at Setdart.

The king of pop art par excellence, Andy Warhol, anticipated several decades with his famous Polaroids to the explosion of social networks, which, like Instagram, have become a true symbol of our era. In the same way, Warhol turned his iconic portraits into a valuable account of the social environment that accompanied him throughout his career, immortalizing the brightest stars of the moment with his inseparable Polaroid camera. This is the case of photography (35175118) That next July 5 we present at our auction, where Warhol manages to capture the essence of the maturity of one of the great legends of the classic Hollywood screen, such as Lana Turner.

The relevance of Warhol’s facet as a photographer within the development of his artistic personality is completely unquestionable, as shown the more than 100,000 snapshots he took throughout his career . His love affair with photography begins around 1962 when the artist acquired his first Polaroid Big Shot camera . Fascinated by the advantages that photography instantly offered him, Warhol began to almost obsessively register everything around him, be it everyday objects, race riots, or the faces of the most famous people of the moment. Since then, he used his camera as if it were a preparatory work, being, as he himself stated, his particular pencil and paper with which he gave birth to a large part of his artistic corpus. In this way, his Polaroid became a fundamental tool in the process of making a later work that he often turned into screen printing. In fact, some of them, like Marilyn Monroe’s, have gone down in the history of contemporary art as true icons that are already part of our cultural imaginary

However, Warhol would soon cease to conceive of photography as a simple accessory means to turn it into an end in itself, a fully autonomous artistic expression through which he opened a fascinating window to the world of the star system and it brought us closer to the reality of its revered protagonists from a much more intimate and private vision than usual. For more than two decades, first with his Polaroid and later with a Minox camera, Warhol devoted himself to chronicling his daily life, in which his friends, many of them famous, became a real object of desire for the artist.

Jack Nicholson, Mick Jagger, Patti Smith, Yoko Ono, John Lennon Salvador Dalí, Man Ray … all of them were the target of Warhol’s snapshots, immortalizing them in strict close-up to show the most mundane side of characters that, to the rest of the world, seemed unattainable . In this sense, we find a great paradox in Warhol’s work. While in his paintings or serigraphs everyday and consumer objects were elevated to the category of art, in his photographs he carried out an inverse process: to humanize the most inaccessible stars of his time. To do this, Warhol used to portray them in an improvised way and in simple outfits, focusing all attention on the expressiveness of their faces and gaze.

His photographs, turned into objects of cult for collectors, shed light on a particular way of understanding the world that turned the genius from Pittsburgh into a true visionary , as evidenced by the deep mark that his legacy has left on current artistic practice